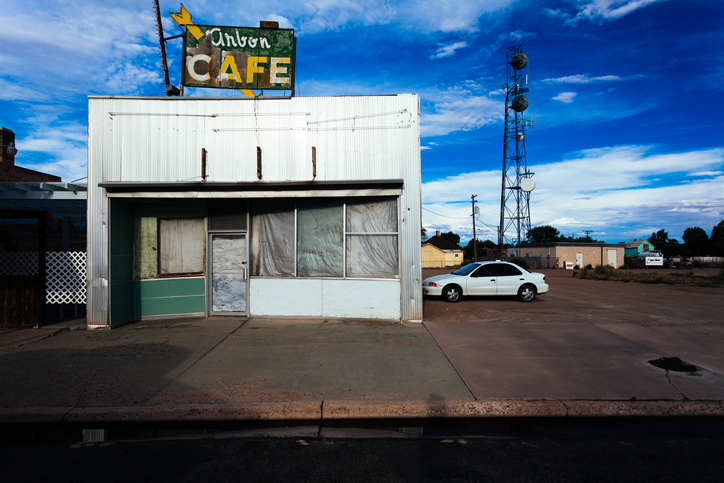 The America of “great again” fame … did it ever exist? The America of village squares with bandstands and memorial cannons, surrounded by Betty’s Diner, Pete’s Hardware and Dry Goods, Tony’s Barber Shop, and Maggie’s Bakery … The America of hoedowns, and gingham dresses and barn raisings. if it ever existed it isn’t there anymore.

It’s difficult to know from this distant perspective and time how much of it was real and how much was fiction created on the back lots and sound stages of Hollywood. I know we didn’t encounter that America when our family drove across country from New York in 1949 to resettle in Los Angeles. I was 10 at the time and what I remember most about the trip on Route 66 were hot, dusty, dry expanses with nothing much to look at, kitschy motels and roadside souvenir stands. The towns in which we stopped definitely were not On Moonlight Bay.

Yet, somehow the romanticized notion of small town America, where people sat on park benches in the evening and kids played baseball at the local park or on empty lots had gotten hold of me.

So, several years ago, Jennifer and I set out to visit that America. We planned a five-week drive from Los Angeles to Key West and back. Our first scheduled stop, Lafayette, Louisiana, was to be on day eight. Until then it would be a matter of stopping whenever we felt like it.

I told Jennifer I wanted to amble across the Southwest. I wanted to watch locals play soft ball at a park and sit in the stands while parents rooted for their kids at Little League fields. I wanted to eat at local diners and mingle with the people who make up small town America.

My plan quickly came a cropper. Those people weren’t there. After three days on the road and three afternoons and evenings in small towns, I said, “We went to visit the Southwest and it was closed.”

Each day, in towns across the region, we’d check into a motel, find a restaurant and scout the local parks and playgrounds. The motels all were part of national chains. If there ever were local diners or restaurants they had been pushed out by big chain coffee shops and, fast-food joints. The parks and Little League fields were deserted. The only people we saw were at the motels and restaurants.

All this before we even reached West Texas, where desolation took on a new meaning. We passed through El Paso, got a look at the border and a peek at the Rio Grande. Then we plunged eastward through unimaginable nothingness, bound for Fort Stockton, which held the promise of being printed in bold letters on the road map. Yes, a roadmap. Google Maps can get you from Point A to Point B effectively. But it doesn’t show those smaller side roads, the one is red on the map, the ones that lead to potentially interesting places that weren’t part of the initial plan.

If ever you want a lesson in boredom, try the drive of 240-some miles between El Paso and Fort Stockton. It exceeds even the boredom of the 240-some miles on the other side of El Paso. To this day, I can’t figure out the reason for those bold faced letters on the map. Fort Stockton apparently exists so a collection of chain motels can have a ZIP code. The most depressing thing about being in Fort Stockton was the realization that we still had to go through the rest of Texas. By now, we were convinced the notion of mingling with the people of small town America was folly. At every stop, we were greeted by strip malls and the same assortment of Best Westerns, Motel 6s, and Comfort Inns. Restaurant Row in city after city consisted of Denny’s and IHOPs. Where there was a Tony Roma it was just like the Tony Roma in any other town.

So we beat it for San Antonio as fast as possible. There we could find people, real hotels and real restaurants. And, besides, my mother was born there.

At the River Walk, we selected a Hyatt Hotel from among the national chains that dominate the area. Some even gave a slight architectural nod to the locale. We took a boat ride on the river, strolled along the promenade and ate barbeque at a river front restaurant. In the morning, we toured the Alamo before moving on, one day ahead of schedule.

We set our sights on Orange Texas, at the Louisiana boarder. It turned out to be a pleasant surprise, made un-Texas green by irrigation from the Sabine River and just the right size for the small town we sought. There was a nice array of non-chain, locally owned and operated restaurants. It was a pretty town. But the hotel situation was no different than what we had left in our wake and the local parks and ball fields were just as deserted.

In the morning we crossed into Louisiana. That night we heard a Dixieland band play Jambalaya while we ate jambalaya at a restaurant in Lafayette. New Orleans and Lafayette were a happy respite, though certainly not small towns. By the time we headed east toward Florida, I was resigned to the fact that small town America is either a memory or a myth, or a little bit of each.

Much of America has been homogenized. Sure, you can seek out authentic Tyler Texas barbeque in Tyler Texas, but you are likely to be staying at the Holiday Inn, Fairfield Inn, Homewood Suites, Hilton Garden, La Quinta Inn, Comfort Suites, or some other national chain listed by Trip Advisor as one of the 10 best hotels in town.

Several years after we made this sojourn, Donald Trump would come riding down an escalator wearing a Make American Great Again hat to launch an ebony time in history. The genius of “make American great again” is that it has no meaning yet has many meanings.

Want women back in the kitchen? Gays back in the closet, blacks back where they came from? Jim Crow? Cops with dogs and firehoses? Mexicans back to Mexico? Each is someone’s idea of great again. Whatever their discontent, whomever they blame for their plight, MAGA is a clarion call to go back, back to a time that was better, back to a time that offers Santa Claus-like comfort, a fiction that exists in the mind but may never have existed in reality. Times were not simpler then. They only seem that way in a desire to avoid confronting the complexities of today.