THEY DEFILE THE FLAG AND CALL IT PATRIOTISM / how super patriots violate the U.S. Flag Code 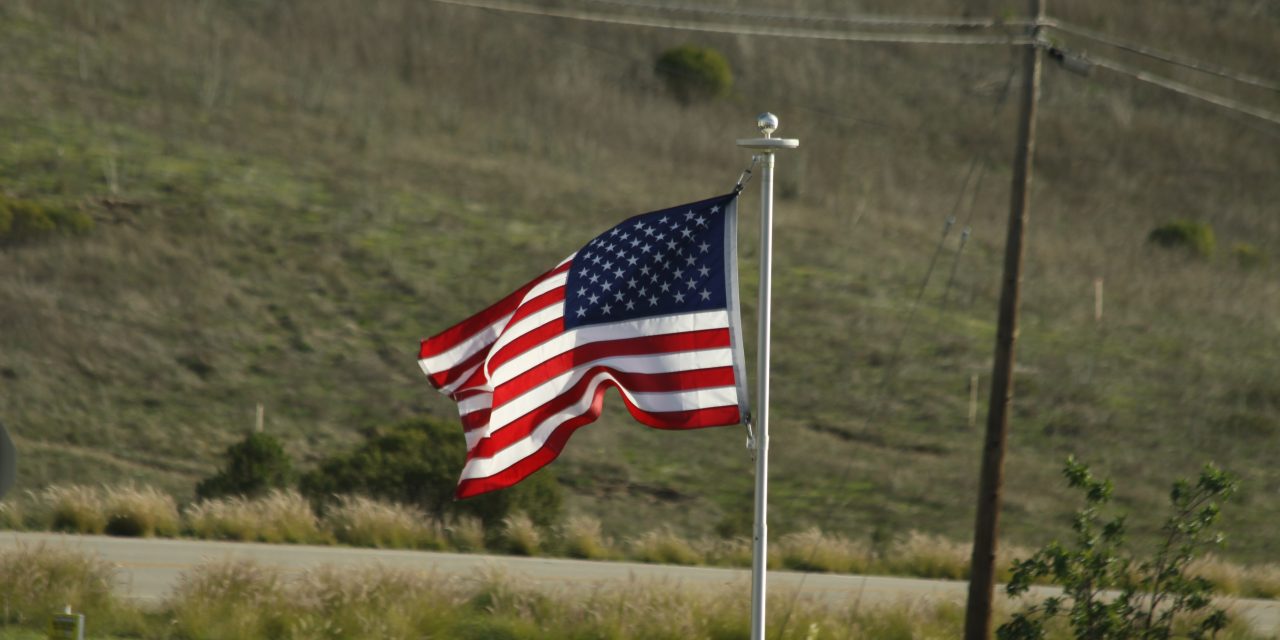 “Patriotism is the last refuge of a scoundrel.”
– Samuel Johnson
April 7, 1775

They think of themselves as patriots. I sarcastically and uncharitably call them super patriots. They don’t just fly the flag; they flaunt the flag.

What they don’t seem to know, or choose to ignore is that there is a U.S. Flag Code that proscribes how, when, and where the flag should be displayed among other things. I imagine, when they learn there is a flag code, rather than see it as a guide for honoring the flag, they may well view it as a liberal plot to keep them from honoring America.

I first became aware of the Flag Code when I was in elementary school in Brooklyn in the wake of WW II. In those days the flag was flown prolifically as 1) pride for having won he war, and 2) a symbol of defiance of the Red Menace. The words “under god” were added to the pledge of allegiance in the 1950s as a kind of “in your face” to the “godless communists” in Russia.

What made me think of all this and the Flag Code now are two flag displays I saw in the last few days. I’ve seen each of them hundreds of times through the decades and can find examples of each virtually every day. But this time, for some unknown reason, something clicked.

We’re staying in a rented house on the cliffs above the ocean in the town of Cayucos on the central California coast. It’s our refuge from the year-end bustle of the city and a place to hide from the maskless marvels who feel free to infect society with COVID before taking their unvaccinated selves to an over-crowded hospital where they will die, either begging to be vaccinated after it’s too late or still insisting COVID is a hoax and vaccination is some devious plot.

Not far from where we’re staying, a distance of one football field at most, there’s a house with a flagpole in the back yard. Atop the pole is a flag that has been flying constantly since we arrived. Through the dark of night and torrential rains storms, that flag flies on.

The proud patriots who live in that house on the bluffs aren’t the only Flag Code violators we’ve seen this week. We went for lunch the other day in the tiny town of Los Alamos, about an hour’s drive south of here. It rained the entire trip down and all the way through lunch. Yet, from the corner of the building flew a tattered flag. Another no-no according to the Flag Code. Tattered flags are to be retired and disposed of “in a dignified manner.”

Here’s what the Flag Code has to say about when the flag may be flown by civilians:
“It is the universal custom to display the flag only from sunrise to sunset on buildings and on stationary flag staffs in the open. However, when a patriotic effect is desired, the flag may be displayed twenty-four hours a day if properly illuminated during the hours of darkness. The flag should not be displayed on days when the weather is inclement, except when an all-weather flag is displayed.”

As for torn and tattered flags, the Code has this to say:
“The flag, when it is in such condition that it is no longer a fitting emblem for display, should be destroyed in a dignified way, preferably by burning.” (Remember this business about burning for later in this article.)

The Code then refers to “(Disposal of Unserviceable Flags Ceremony)” for instructions regarding what to do with torn and tattered flags. This ceremony is a creation of The American Legion and holds no place in U.S. codes or statutes other than this mention. To learn what this ceremony consists of we have to look elsewhere. The America Legion ceremony is long, involved and militarily pompous. At the other end of the spectrum is an instruction to cut away the blue field and cut up the stripes with a scissors, then throw it all in the trash because the cloth is no longer a flag. The Department of Homeland Security United State Coast Guard Auxiliary offers a process that edges on comic.

While we’re at it, let’s look at a few other frequently ignored dictates of the Flag Code. (With my snarky comments added.)

“The flag should not be draped over the hood, top, sides, or back of a vehicle or of a railroad train or a boat.”
Has anyone been to any of the myriad civic parades and celebrations that carpet the land on Memorial Day or the Fourth of July, when thousands of civic and military officials wave proudly from flag-draped convertible cars?

“The flag should never be carried flat or horizontally, but always aloft and free.”
Try telling that to the military honor guards that stretch flags the full length and width of a football field during halftime of a bowl game.

“The flag should never be used as wearing apparel, bedding, or drapery.”
Where to start on this one. It’s violated so frequently it defies counting. And besides, isn’t this first amendment protected free speech.

“The flag should never be used for advertising purposes in any manner whatsoever. It should not be embroidered on such articles as cushions or handkerchiefs and the like, printed or otherwise impressed on paper napkin or boxes or anything that is designed for temporary use and discard.”
Does this include mattress and auto sales on holiday weekends? What about napkins for July 4 picnics? I think you can come up with your own list of examples.

“No part of the flag should ever be used as a costume.”
So, drum majorettes’ outfits? That’s a no? Draping a little girl in a flag-like outfit for the Labor Day parade? No? Wrapping the Statue of Liberty in Old Glory? No?

The Flag Code was originally adopted by the National Flag Conference June 14 & 15, 1923. It was revised a year later and has been revised by congress and Presidential order many times since. It didn’t become law until 1942, when it was written into the U.S. Codes as Chapter 1 of Title 4.

Oh, by the way, the Flag Code says the preferred way to dispose of a dirty or torn flag is by burning. I first learned this as a reporter at a local daily newspaper in the early 1960s. I was assigned to cover the American Legion Chapter’s ceremonial July 4 flag burning. The Legionnaires gathered up flags, dumped them in metal drums, poured in some gasoline and lit a match. Nothing at all like the Legion’s own formal ceremony.

Before we go, let’s look at what the Flag Code says about when the flag should be hoisted.
“The flag should be displayed on all days, especially on …”
It then goes on to list 21 specific dates, most of which have nothing to do with the flag or American history. OK, July 4 makes sense. Independence Day. But Mother’s Day and Father’s Day? Easter Sunday? Isn’t that a religious holiday? I’ll buy Inauguration Day, although the Code doesn’t say it should be only in years when there is an inauguration. Why New Year’s Day. Has America appropriated that day from the rest of the world? Christmas and Thanksgiving?

You get the idea.
“and such other days as may be proclaimed by the President of the United States; the birthdays of States (date of admission); and on State holidays.”

So, we keep piling on days every time some politician wants to hide behind patriotism.

But here’s the kicker: Nowhere is there a mechanism for enforcement of the Flag Code or a word about penalties for violation. So, all you super patriots out there, flaunt away. Fly your flags in rain and sleet and snow. Let ‘em flap in the wind until torn and tattered and then let them continue to flap. But horrors if someone wants to burn one in protest against a war, racism or other perceived evil. How dare they burn a flag in a manner not acceptable to the American Legion. Arrest the miscreants. Defiling the flag is permitted only in the advancement of patriotism.